The Chosen by Chaim Potok is a novel about friendship, fathers and sons, Old World v. New World, and the power of communication. 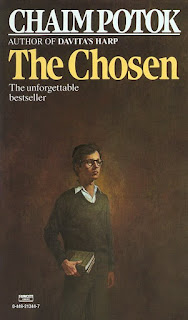 Protagonists: Danny Saunders and Reuvan Malter, two young men with different backgrounds who become friends and find their identities through breaking with their fathers' wishes.

Conflicts: The view of religion presented and played out by all main characters, i.e. Danny, Reuvan, Reb Saunders and David Malter. The struggle between ones heart and ones mind.

Themes: Children will find their own way in life. Friendships can overcome obstacles. Communication through silence is possible. There is more than one way for Judaism to express itself.

Reflections: Chaim Potok is a master at character development in my opinion. I loved all the characters in this book. I loved the crossover aspects of the book, mainly between Danny and Reuvan with regard to their interests in life and with the communication styles of the fathers. I liked how each father expressed his love for his child even though that expression was imperfect. The use of silence in this book was interesting and appeared in many different ways, touching both Danny and Reuvan in different ways. Although Danny is originally "chosen" to be the replacement for his father, Reuvan is equally "chosen" to be Danny's friend. I really enjoyed watching the characters' personal growth and Chaim Potok did a great job at drawing me into the novel from the first page on.

"'No one knows he is fortunate until he becomes unfortunate,' my father said quietly. 'That's the way the world is.'"


"The silence that followed had a strange quality to it: expectation, eagerness, love, awe."


"For years his silence bewildered and frightened me, though I always trusted him, I never hated him. And when I was old enough to understand, he told me that of all people a tzaddik especially must know of pain. A tzaddik must know how to suffer for his people, he said. He must take their pain from them and carry it on his own shoulders. He must carry it always."