It had to happen sooner or later. Neviyah to the ER. Okay, she had been there once before, but that was when I was in the ER when she was four days old and my ovary had decided it was a good time to explode. But I digress...
In the 9 o'clock hour, Neviyah was happily sleeping in the co-sleeper. Suddenly, she started a kind of choking sound. I put her in the sitting up position and she continued to choke. I quickly lifted her onto the bed with me and began to pat her back. She made a sweeping inward gasp and then continued to attempt to get an in-breath. Before we could completely freak out, it was over. I laid her on my chest and that way she slept for 15 minutes. I then placed her back into the co-sleeper.
Fast forward 5 minutes.
Neviyah is making loud swallowing noises. I sit her up and start to pat her back. She gags and again cannot get an in-breath. This incident is slightly longer than the last. There is nothing in her mouth. She does not spit up. She justs gasps and chokes.
We call the exchange. Explain the incidences. They say it is probably reflux but that we should take her to the ER to make sure nothing else is going on.
So we have a quick discussion--my husband and I. You take her and I'll stay with the kids? Or I'll take her and you stay with the kids? Of course, as we asked these questions to each other we knew we would all be going. We wake the kids, call my mom and all meet at the local Saint Something hospital.
Neviyah was not overly thrilled to be woken up, poked, prodded and stipped down to her diapies. And although she is showing no other symptoms, she is diagnosed with reflux. And given a prescription. And I am told to breastfeed in "smaller, more frequent" sessions.
Fast forward to midnight.
We are dropping off the prescription. The kids are hungry, tired and crabby. Okay, I was the crabby one. But we were all tired.
You know my aversion to medicine. I want to try to take care of it naturally first. Fear of a repeat gasping session overtakes me, though, and we decide that we will give her a dose tonight but tomorrow we will evaluate to see if these things happen again.
I dutifully fill the syringe and as I am trying to dispense it, Genius over there (er, that would be my husband) decides he is more qualified to dispense said medication to our daughter. I tell him, "slowly and into the side of her cheek" just as he forcefully dispenses it to the back of her throat...and Neviyah immediately chokes and vomits it back out. Great job, Rob!
He wants to redispense. I don't. We don't know if any made it down. I feel it is too unsafe to redispense. We haggle. I win. It is now around 1:00 a.m. Aura is due at 10 a.m. The house is a wreck. I have no food or drink. My plan to clean in the early morning when everyone was sleeping. We have two more incidences with the choking/in-breath thing before we allow ourselves to fall asleep, somewhere around 3:00 a.m.
And now, I am typing this instead of cleaning because I have that feel-sick-to-my-stomach-thing-because-I-am-old-and-stayed-up-too-late thing. You know that one, right? 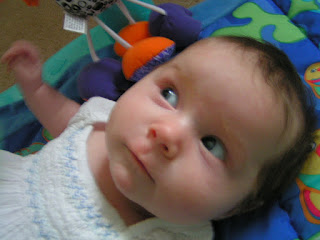