It Was Bound to Happen

It was bound to happen. This little squirrel friend of mine. Running up and down the tree in my back yard. Sometimes he would come close to the house, prancing across our deck railing. I used to sit outside and watch him or sometimes stand at the kitchen window, amused by his quick, darting movements.

Then we got the dogs. The Jack Russell terriers. The boys.

I didn't see my friend for a quite a while. Recently, however, he began taunting the boys. He would come down just to the height that is out of jumping range for the dogs. Then he would run around and around the tree while the dogs went ballistic.

I have to admit that I quite fancied that squirrel. I maybe even lived vicariously through that squirrel as he played his game with them. Teasing them. Relishing his role as king of the tree.

I said to Rob, "Won't the dogs get him?" Rob assured me that they wouldn't. "That little squirrel is smarter and faster than you think."

I hear Chandler do his girl-scream. I run outside and there is Sol, squirrel-neck in his mouth, shaking the life out of him.

We scream. Sol drops. Mordi runs out. We scream some more. The dogs run in the house. Chandler claims it is still alive but from the deck I can see that it isn't moving and is in a contorted position.

"Don't mention this when Aliyah gets home. I will tell Rob privately."

And I do. Tell him. And he goes out with the stick. Flings it over the fence. Comes back inside. All done. I am glad I am not a man and expected to fling dead squirrels over the fence.

It is not that I don't get the nature thing. I have respect for that. I am not mad at Sol. He is, after all, bred for this kind of thing. Of course, I don't understand why he has to kill my squirrel-friend but does nothing to knock off the mole tearing up our backyard.

I miss my little friend. He was fun to watch. The boys will be bored now. They killed their entertainment. 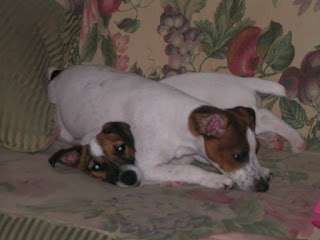 Mordi (under) and Sol (over)