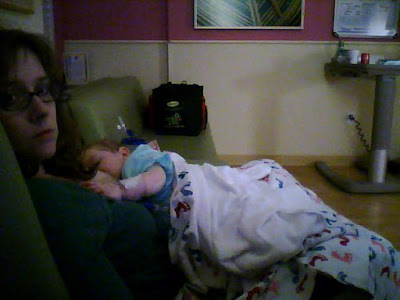 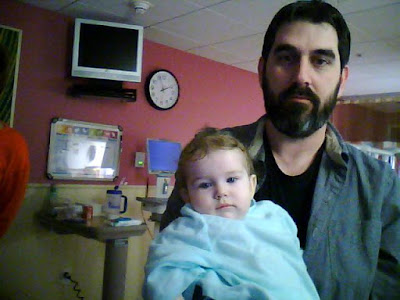 It was a little shocking to see Neviyah post surgery. I didn't expect all of the tubes. She had a PICC line, an IV in her foot, two drains out of her stomach and another, thicker drain from her stomach as well. She was shivering and asleep. A few times she woke up, eyes still closed, to whine in a hoarse voice. I wanted to cry. In this recovery room were many babies doing the same things as her--awakening from their general anesthesa. One little girl, maybe 18 months old and directly next to Neviyah, stopped breathing. It was a scary 1/2 hour. 15 or so doctors descended upon the little girl and began life saving measures. Yes, I cried and so did Rob. About an hour or so later, we were given a room.
The first 12 hours after surgery, Neviyah slept. She woke up 5 hours after surgery to breastfeed, vomit and then go back to sleep. She didn't wake again for some 7 hours. She was on morphine and an anti-spasm mediciation for her bladder. After breastfeeding a second time, Neviyah started to become a bit more alert. She awoke happy. They removed her IV and she had a bowel movement.
Today, you would never guess that this child has surgery yesterday. There was one set back this morning when she vomited 5 times but since then--she has been fine. I have seen her cut when it was redressed and it is a smiley from one side of her to the other. Still, she is sitting up, twisting, standing, crawling and all of that without even a grimace. She has had no pain medication since 9:45 a.m. She is sleeping right now on Grandma. She is quite tired from the dance party we had in the room as we listened to "Dance Baby Dance" while dancing around the room. She also went on several excursions in a red wagon to the 7th floor Ronald McDonald Room. When the therapy dog came around, she missed out because she was napping.
Neviyah is amazing. The doctor was surprised she was pooping already. That she was in no apparent pain. And seems practically back to normal for the most part.
...
Email Post