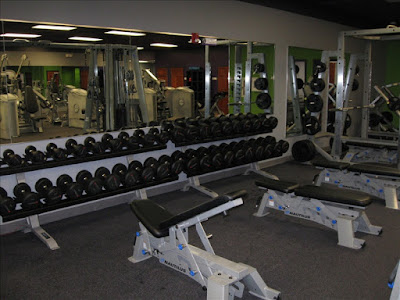 This is the free weight section of the gym to which I belong.  If I thought working out on the machines were difficult...free weights require more muscles to stabilize holding the weights.  While initially it seemed a bit easier, that thought didn't last long.  At times, literally, my arms were unable to lift without considerable will power on my part.

Mostly, I did 3 sets of 15 with 30-second resting periods in-between.  The weights varied based upon the area being worked.

I also did 45 sit ups on the big ball.  Oy!  Can you say PAIN?!  I really expected my 1/2-pregnant-looking belly to be immediately dissolve after that workout!  However, it is still there.  The injustice! 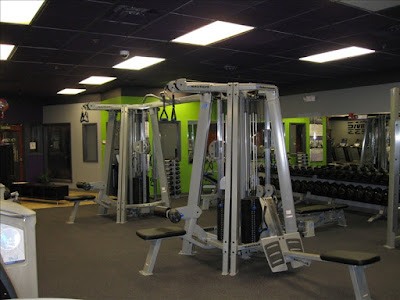 I also worked with other pieces of equipment I have never used before.  All in all, even though I was exhausted and my legs were shaking so hard that I could barely stand in place, I felt pretty good afterwards. Surprisingly, I felt pretty good this morning.  I even felt pretty good at the JCRC meeting this afternoon.  However, the walk back to the car after the meeting...

I don't been to be crude but my butt-muscles were KILLING me on the walk back to the car.  KILLING ME! Then, once I got back to work, the back-of-the-leg ache began and finally, the stomach muscles joined the party.  Add to that the chest muscle, back-of-shoulder muscle and the lower back/top glute muscles still sore from last week and you have me feeling a heck of a lot older than I really am.

Next workout -- Wednesday.  I am so and so not looking forward to it!
Email Post
Labels: health workout

Kalanit said…
I am supposed to be doing that on my own and I have not yet done it. However, my scheduling is clearing up a bit so I expect to start that in-between my trainer days.
October 13, 2010 at 10:23 AM