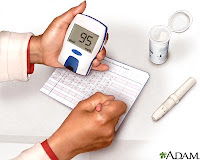 Since I had a "dizzy incident" last time I worked out, I decided to test this time around to make sure everything was okay.  My blood sugar was 154 in the parking lot before going in to work out.  Roughly thirty-five minutes later, I was feeling a little light headed and a little nauseated.  My heart rate was up but I was in the middle of a working out.  Anyway, I took my blood sugar reading and it was at 90.  I took a few sips from Chandler's smoothie, did some lunges and then decided to call it a day.  I started to feel even worse so I took a few more sips of Chandler's smoothie.  By the time I got home, my blood sugar was 108 but I was still having a few symptoms.

It isn't that 90 is a too-low number.  It isn't.  It is the rapid drop that is causing the issue.  Next workout is Friday and I plan to eat some fast-acting carbs/sugars prior to working out in hopes of avoiding a false reaction/rapid drop.
Email Post
Labels: diabetes workout