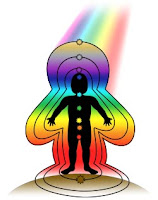 Sometimes, when I least expect it is when that spiritual zap occurs.  Disconnected from davening today, I would not have expected anything.  Rabbi Rose seemed distracted or even sad.  I usually draw off his spiritual energy.  Later, I found out that his good friend in Japan had died and he had just found out this morning.  The people sitting behind me had noisy kids who were playing games on a phone.  The people in front of me were uninterested and the little girl was playing a handheld electronic game with the sound off.  I was also sitting a few rows further back than usual and two rows back from Perlmutter (I usually sit the row behind).  There were also 4 million other things going on during the service, like a bar mitzvah, baby naming, this and that and another.  All of these things threw me off.  However...
It was in the middle of all of this chaos that the tap-in occurred--and more than once.  The first was when the Aron Chodesh (Holy Ark) was open.  It started with a feeling in the pit of my stomach -- kind of an uncertainty feeling but in no way unpleasant -- and continued with an ever-so-brief overwhelming feeling of connection.  The hair on my arms were on end, and as soon as I became aware of it, it started to leave me.  In a desperate attempt to make the feeling stay, I "tried" to daven it back but alas, that doesn't work.  I know that.


Later, during the Amidah (Standing Prayer), it happened again, right before the concluding meditation.  I always cover my face with the prayerbook and say a private prayer.  It was during this private prayer time that I had another moment of connection.  And again, as soon as I became aware of it, it started to leave me.  This time, I just let it go and continued my prayer without consciously trying to "get it back."
The last time was kind of strange.  It was in the middle of Rabbi Rose's sermon.  As you probably know, I personally get so much from learning with Rabbi Rose.  It is the highlight of my week, and when he teaches during the break, it is even better.  One part of what he spoke about today was the meaning of a deep bow (think of bowing in Japan).  Instead of be ing a sign of respect or humility or deference, he spoke about his friend teaching him that such a bow is a gesture acknowledging the potential of the person, their future being, who they will become, can become.
Imagine if we all greeted each other from the perspective of one's potential, a person's future becoming.  How much more respectfully would be approach our children, our friends, our family members.  What if when we interacted with others, we chose to focus on "seeing" them in the light of who they will or may become.

It was during his explanation of this (which I am sure I am butchering) that the last instance of connection occurred for me. It was unexpected (as I was not davening and thus had no intentionality for it to occur). It again was a brief tingly moment of overwhelming connectedness.

I live for these moments and they don't happen often.  How strange that in these circumstances it occurred!
Email Post
Labels: new year rabbi spirituality