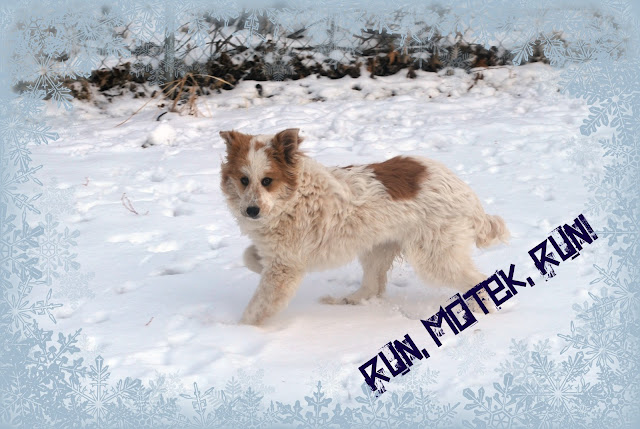 I feel compelled to post something lighter, sweeter, hopeful.

Motek -- what an awesome dog she is -- is becoming more and more comfortable here.  She is now jumping on the couch to sleep, approaching me and licking my toes, playing chase the ball with me outside, and running down the hall with the other dogs to fetch.  Motek can run!  She loves to chase the ball outside.  She does goofy things, like slide through the dirt and leaves to get the ball.  Throws it in the air.  Pounces on it like a cat.  Makes rah-rah-grah noises.  Speeds past me with it in her mouth.  So fun!  We also found out that she is quite good at catching balls in her mouth, and she seems to love doing it.

I am still working on the same commands to make sure she has a good idea of what they are.  This is the difference between a Jack and a Pyr.  SIT.  Jack:  sits immediately, jumps up excitedly, sits again, wiggles, lays down, sits again.  Time elapse:  2 seconds.  Pyr:  looks at you, looks at treat bag, looks at clicker, looks around, looks into your eyes, s - l - o - w - l - y puts self into the sit position.  Time elapse:  4 to 6 seconds.  However, compared to the Jacks, she picks up commands by watching them and so can do a command on 1 or 2 teaches.  And it sticks.

I am going to work on desensitizing her to the camera because I want to be able to take pictures.  We have what used to be a stuffed fox outside.  Long ago the Jacks ripped all the stuffing out.  Motek loves this thing.  She shakes her big head left and right so quickly.  She throws it in the air and rolls all over the ground with it.  I would love to get some photos of it.

I can now pet her several times a day, but she still has that just-tolerating-it look instead of the ooooh-this-feels-good look.  In time, in time.
Email Post
Labels: dogs