Updates from a Plant-based Eater

It has been three weeks!

I haven't keeled over and died.  I haven't had extreme cravings.  I am not missing any particular foods.  I gave up eggs, milk, yogurt, cheese, butter, any other dairy I have left out, Vegan junk food (pre-made fake sausages, etc.) and coffee.  I am eating only foods that have less than 3 grams of fat.  I have only messed up once - on Super Bowl Sunday, I had a small bite of brown baked cake that was made with refined flour and eggs.  Other than that...I have stuck to it!

I have noticed that my blood sugar is more stable.  Also, I feel like maybe I have lost a little bit of weight but I don't know because I don't own a scale!  The kids and Rob still have cheese and dairy products they can incorporate into what they eat. The biggest change for them is that Rob is trying to eliminate or reduce the oil used so he is sauteing with water or vegetable juice. So far, so good!

Really nice is that Whole Paychecks has a lot of vegan, oil-free items in their buffet.  Not so nice is the price!

I am staying away from using the word Vegan since it can be politically charged, and because I think that plant-based is a better descriptor.

My mother, who is going through chemo right now, has not taken up the plant-based diet, but she has certainly modified her diet to include many more fresh, organic produce and is making a lot of healthy choices these days. Very proud of her for that!

I guess I need a shout-out to my husband, Rob, who has supported this change, incorporated it into his meal preparations and hadn't balked at this endeavor. 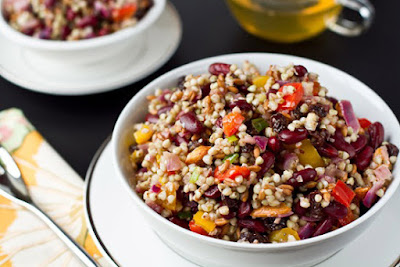