My Daughter in Pink!

As you may know, my oldest daughter has been on a color crusade for quite some time now.  It has been really interesting to see her develop what her sense of style is going to be, and to see how she decided to navigate it.  Being a person who enjoys drastic changes to my hair, and has never had a sense of style, it has been wild to watch this emerge in my daughter.

She started with the all back thing sometime in the middle of the school year.  All black clothes.  Of course, she doesn't own an all-black wardrobe, so she had to stick to things that had black in them.  She wanted nothing to do with pink, and if even a touch of pink was on something, she would refuse to wear it!  She wanted to learn about what emo, goth and scene were, and we did some internet research.  I helped her discover that she really didn't fit in any of those groups per se, although for a while she claimed at school to be scene.  That got us a call from the counselor.  Really, though, I am not concerned.

Then she moved on to her skateboard obsession.  I told her I would much rather her consider herself a skater girl, and she wouldn't be pigeon-holed into a narrow style.  Jeans and t-shirts are fine!  She liked that, and continued on her way, preferring black in there somewhere, and saying she was a skater girl. 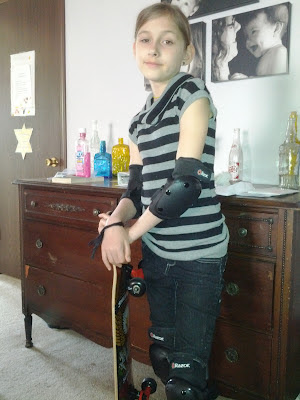 Suddenly, right before camp, Alia decided that she was going to show us that she was a "flexible thinker and person."  Yes, those are words we use with Alia when helping her cope with anxiety and other such things.  She packed a heck of a lot of things that were pink or pink-ish.  I secretly was afraid for her. What if she changed her mind?  I could see the drama unfold in my mind...!  So, when I look for my daughter in camp pictures...I am always surprised that the girl in pink is mine (blindfolded)! 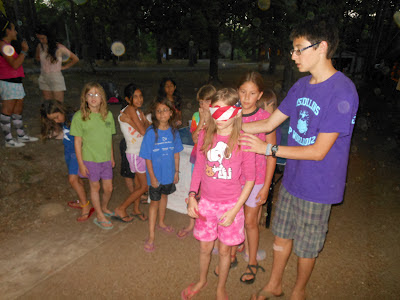