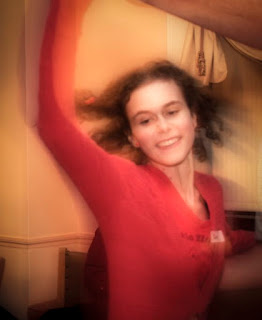 I didn't know Zane Z"L personally. She had already left this Earth when I met her father, and a few of her friends.  However, I am moved by her. Her life. The unending amount of love and support both when she was alive and now today, some four years later. Her presence is still active, and her energy still a part of the Universal energy that pumps through those who knew here. I can tell. I can see her influence on them even now.

These are the questions that Zane wrote. She came up with them about 6 months before she died, at a time when her dad, Joey, and a friend of hers were having frequent conversations. Both Zane and her friend were in Eating Disorder treatment at a local facility. When they were at a certain level, the kind that allows one to live at home instead of being inpatient, the three of them would meet at Zane's dad's house. The friend is Autistic, making it hard for her to feel comfortable speaking in groups. Zane's aim was to make up questions that might draw her friend into the conversation in a comfortable way. It went something like this -- Zane would pose a question, and Joey answered first. The chances of Joey saying something that the friend wouldn't expect were pretty high, and this unexpected response would prompt the friend to join the conversation. It worked. The three had many conversations over the some 400+ questions that Zane composed.

The unintended byproduct of this practice is that Joey now has a journal if you will, a reflection or a slice of part of Zane's inner life at that time.

There are many sections, and between 2 and 6 questions usually per section. The first section though has 18 questions. 18 = Life in Judaism. This is not lost on me as I begin to answer Zane's Questions.

1.  What was learning to drive like? Who was your teacher?

For me, it was easy. We had driven from time to time as young children on my dad's lap. Steering. Hitting the gas pedal when able to. My dad was my teacher, and it was a relatively easy and pleasant experience. I didn't have many pleasant experiences with my dad, but I remember learning to drive was one of them.

2.  Where did your family keep the grocery list when you were growing up?

My family did not keep a grocery list growing up. Is this a 70s thing? I don't remember ever being asked for input or even giving input on what I wanted from the grocery store. When I was 16, and could drive, a few times my mom handed me a list, arranged by store, and I only went a few times to do this kind of errand.

3.  If you were homeless, where would you go and what would you do?

I think about this a lot because one of my fears before and since giving birth and/or becoming a parent is the fear of becoming homeless and what I would do. I would go to a friend's house. In their basement. I would first arrange for someone to watch my dogs, rats, gecko. And then the children and I would go to Tegan's or Rachael's or Heidi's basement. That was before Will. Where would we go now? I need to explore this with Will. We should have a plan for when I disaster-scenario.

4.  What is important about a hampster?

5.  If slavery is prohibited, what can be said of sex-trafficking?

6.  What would you have been named if you were the opposite gender?

I don't know what my parents would have named me if I had been a boy or inter-sexed.

7.  Name three people who have changed your life.

It would be easy to say Chandler, Alia, Neviyah - my children! And they have changed my life considerably. I will add them as one and name two more.

The Lubavitcher Rebbe. No, I am not Chabad. However, it has been the Rebbe's teachings, his ingenuity, his line of people who have inspired me to become more observant, to become Orthodox, to live my life in a way that creates meaning.

Boulter Kelsey. My boss from days past. My pseudo-father figure. First person to take a chance on me. Believe in me. Encourage me to be more than my childhood experiences.

8.  What was your favorite series of books as a kid?

I didn't have a favorite book series as a child. I went through periods of not reading. I was an outdoorsy kid. Fort building. Bike riding. Woods dwelling. My parents didn't provide a lot of books for me, and I tended to spend as much time as I could outside. Now, I want to add, I may not have read a lot but I wrote poetry from as early as I can remember.

This is a hard one. I think it was in the early 90s when I was in University, independent, learning new ideas and new things. I remember thinking I had a long and full life ahead of me. I couldn't wait to get to class, to learn about literature, read more and more books, learn about the world I lived in. It was one of the most hopeful times of my life.

10.  In elementary school, what were three of your career aspirations?

I wanted to be a teacher, a detective, and a dog trainer.

Yes, Nevi and I participated in a community garden in University City for two years several years ago. I just mentioned the other day that I wanted to do that again this summer.

12.  If you had to put your philosophy of life on the t-shirt, what would it say?

13.  If you wanted to relax, what kind of music would you listen to?

14.  Were you breastfed or bottle fed as a baby?

My sisters were both breastfed, but I was bottle fed. My mother almost died in childbirth, and so she stayed in the hospital when I came home as an infant. My grandmother stayed with us to help care for me.

15.  Would you rather see a movie at home on a DVD or at the theater?

Yes! When I was pregnant with Alia, I took a Pregnant Belly Dancing exercise class. One of the news stations came to film our class. They wanted all the pregnant women to lift their shirts and do the class with their bellies showing. I declined for modesty reasons. I had to argue my position, and since I did pay for the class, they pretty much had to let me. I was easy to find on the TV spot! Ha!

17.  Do you believe in the death penalty?

The short answer is that I do not support the death penalty. At. All. For a variety of reasons, some of which are the racial and economic injustices that are woven tightly into the court system, the idea of taking another person's life is a power-position that is dangerous, and because I feel it is morally wrong. That being said, I do believe in it in societies where a dangerous person cannot be contained, like a nomadic society where there is too much risk in trying to keep the person from harming or killing the other people who make up the community. It is only in that circumstance, if there is such a circumstance, where I would reconsider my view.

18.  What's one thing you wish you had known as a freshman in college?

(1) I don't actually ever become homeless (see question 3 above); (2) Life will always be a struggle for me so I need to gear up for it; (3) I am going to have some beautiful and also high-maintenance children - it would have been nice to do some extra learning about empathic children prior to taking on parenting (not that I didn't figure it out - I did - but it would have been nice to be properly prepared).